Informatica customers may have noticed a major change that occurred earlier this year. As of March 2022, Informatica’s Enterprise Data Catalog (EDC) 10.5.X is now the only fully supported version. Additionally, businesses running earlier versions of the EDC are now missing out on the new set of features included in the 10.5.X release while running the risks associated with using an unsupported version.

For many companies, upgrades of any kind can feel daunting. Often upgrading enterprise software is not an easy decision — the risk is perceived as higher than the reward of new features. If the upgrade can go smoothly, however, it is worth the undertaking because of the access to new capabilities and increased stability.

Ultimately, not all upgrades are made the same. In our view, the EDC 10.5.X upgrade is worth the effort because it is not only the first major product overhaul, but also a more mature, stable, and business friendly version with significant benefits for users. In the instance of EDC 10.5.X, then, there is a strong case from both a tactical and a business value perspective to justify an upgrade.

The EDC 10.5.X release offers a balance of business and operational benefits, many of which are more focused on simplifying the life of users and expanding on existing functionality, rather than introducing new features. From a business perspective, significant improvements to the application have been made, which appears most obviously in the user experience — specifically with the enhanced search functionality.

The release has a redesigned search bar with three key enhancements. As with other software based on search functionality, Informatica EDC users spend an inordinate amount of time using the search bar and improvements in version 10.5.X will make it far easier to use and provide more targeted results. The goal of any data catalog is to provide a wealth of information regarding the availability and location of pertinent data. A mature catalog can contain hundreds, if not thousands of distinct data sources, with millions, if not billions of assets. With EDC 10.5.X, a search pre-filter can now be leveraged to narrow the possible results, allowing a user to start their search with a more refined set of search results. The search bar thus now incorporates context — meaning someone in finance will be able to filter to only see results relevant to finance, instead of having to wade through finance, customer, and product data, for instance. This also helps to prevent users from reverting to bad habits such as sending group emails requesting specific data sets, which undermines one of the main intended goals of EDC, namely the promotion of a self service data culture. Additionally, a redesigned side panel is now offered that makes the asset type more visible in the result list. Finally, there is also an added asset information pane that allows users to quickly identify the most relevant results to explore. It is easier for users to save and reuse searches than it was in previous versions, as well. 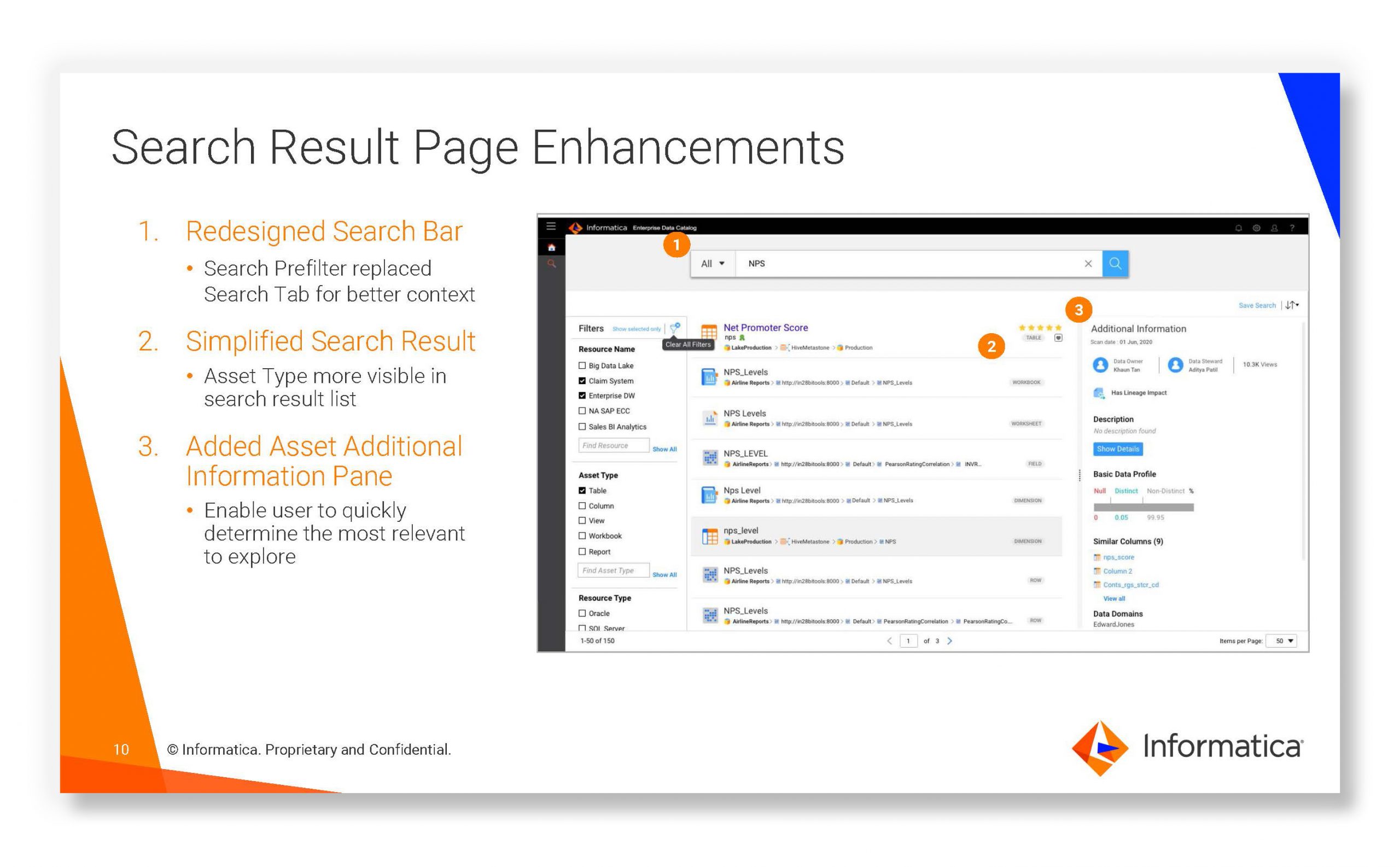 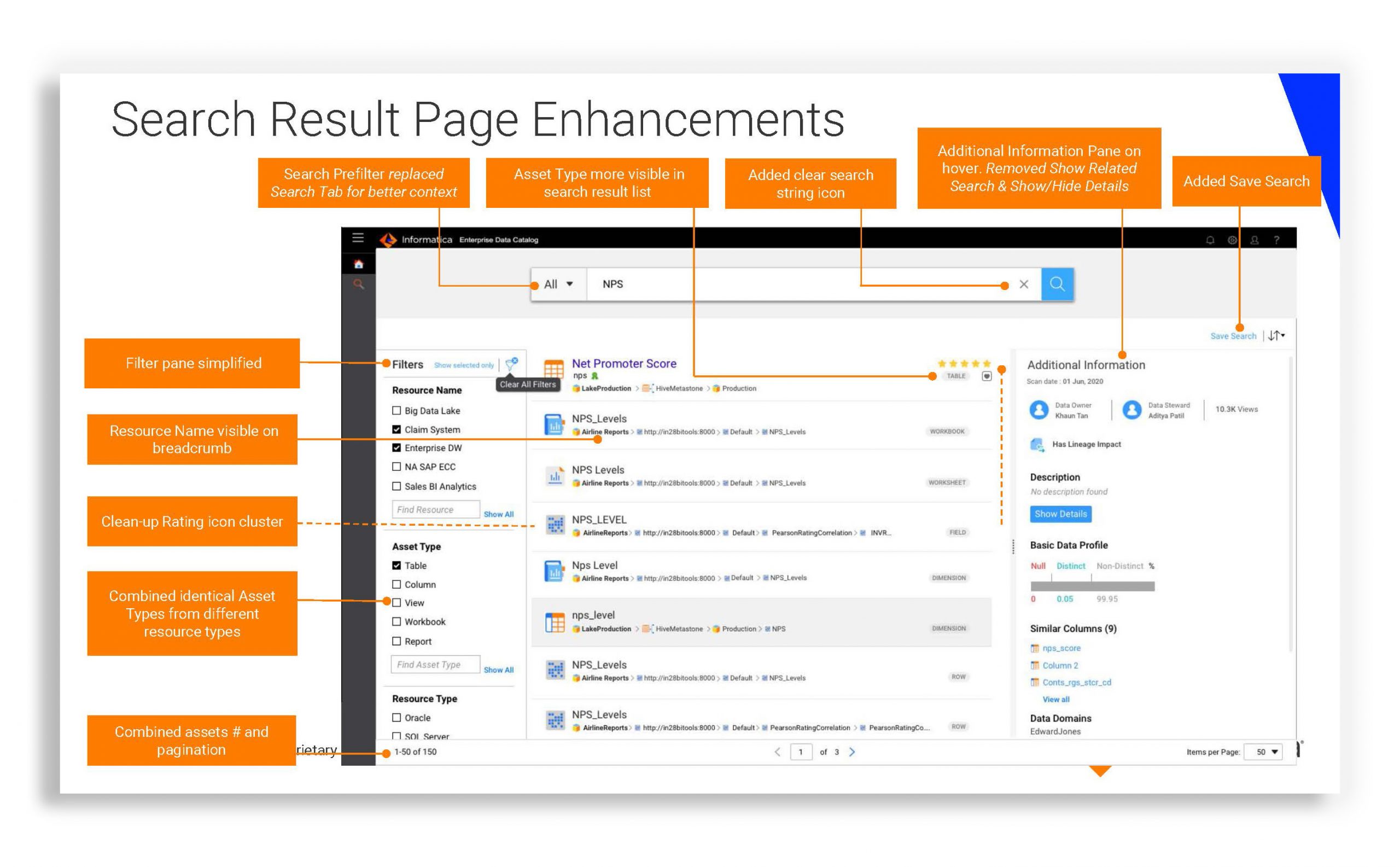 The upgrade also offers an expanded EDC API that allows users a wider array of programmatic ways to curate the catalog. With this added functionality, users can provide additional business metadata to the technical metadata that EDC brings back automatically.

The upgrade helps newer users with an expanded list of walkthroughs, bolstering adoption by enabling users to better understand and fully utilize the capabilities of the software. This functionality is like the “wizard” help functions seen in other software. From the catalog end user and administrator interfaces, expanded walkthroughs are provided that give step-by-step instructions of basic functionalities in the tool which can help reinforce the purpose and intended uses of the catalog and greatly benefit adoption efforts for new users. This also takes the pressure off of administrators and owners of the application who currently are expected to teach the enterprise about their new tool for data governance.

Ultimately, the 10.5.X upgrade is worth it from the business perspective because of these search and ease-of-use enhancements. But there are also significant benefits on the operational side that make adopting this new version even more attractive for companies.

The tactical benefits from EDC 10.5.X are all about making the system more robust and easier to use for those charged with running the application. These benefits, which impact end-users as well, come in part from the improvements Informatica has made to the architecture of the system.

Increased Stability and Ease of Use

A huge tactical boost comes from parts of the upgrade that have made the entire platform more stable. As a result, companies can spend more time focusing on using the tool rather than trying to get it to work.

Shift From Hadoop to MongoDB

A data catalog has to be able to process data at scale to work properly. For a long time, many technologies, including EDC, relied on Hadoop for this support. In this new release, Informatica has moved the scalable storage repository from Hadoop, one of the pioneers in big data processing, to MongoDB, a document database. This switch makes the system more stable and efficient, as the aging Hadoop and Apache Hbase storage architecture was the system’s biggest cause of operational problems in previous versions. In addition, Informatica replaced the Hadoop workflow architecture with HashiCorp’s Nomad, an architecture for orchestrating scanner jobs, again, using MongoDB, as the data store of the resulting metadata. This has modernized the way the data catalog works so that new data is incorporated into the system and retrieved more efficiently than in the past. This new architecture enables EDC 10.5.X to have the same scalability but with reduced overhead compared to previous versions.

Tactical Benefits of a Better Platform

The new architecture has broad implications, improving EDC 10.5.X in a variety of ways that make the data catalog much easier to run and operate. These improvements, detailed below, free up IT support and administrative users to focus on making the data corpus better and increasing business value, rather than spending time on running the tool:

What’s clear is that the EDC 10.5.X upgrade is a mature offering from Informatica and companies would be wise to consider adopting it. Working with an experienced service provider, such as Infoverity, who has experience with EDC since its launch, helps to decrease the risk of upgrading and ensures a smoother implementation.

Infoverity, a 100% employee-owned company, is recognized by IDG’s Computerworld as one of the Best Places to Work in IT, as a Wonderful Workplace for Young Professionals and as a “Best Place to Work” by Inc. Magazine and Business First. Infoverity’s global headquarters is in Dublin, Ohio, the EMEA headquarters and Global Development Center is in Valencia, Spain. Additional offices are located in Germany and India.

For more information on Infoverity solutions, contact us today.

Local Expertise with a Global Reach